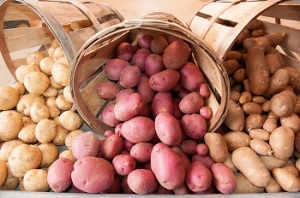 When I love something, I love hard—and that’s how I feel about this stuffed baked potato recipe that I’ve been making over and over again lately. The recipe is my own original recipe, but was inspired by the recipe that came out in the April 2009 issue of Martha Stewart Living (see her original recipe here). I’ve adapted to include sour cream in the yogurt mixture, and because I prefer them, scallions instead of chives. Another small difference is that my stuffed baked potato recipe uses the potato skins, where Martha’s uses dignified little ramekins. The ramekins might be more sophisticated looking, but I prefer using the skins because it seems friendlier that way.

This is a great recipe to alter and make your own. Hate Greek yogurt? Leave it out. Want to use shallots or chives instead of green onions? Go ahead! Must add cheese? No problem. That’s the great thing about potatoes–they’re so versatile and go with practically anything. Measurements like the ones I’ve included below are just a suggestion.

Dress it up, or dress it down—use this stuffed baked potato recipe to inspire your next dinner, and make sure to let me know what you think in the comments. 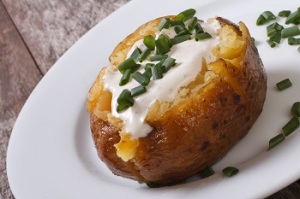 Preheat oven to 375. Wash potatoes and pierce them all over with a fork, drizzle two tablespoons of melted butter over potatoes, and sprinkle with kosher salt.

Arrange onto a baking sheet or heavy ovenproof skillet, and bake for about 1 to 1.5 hours, or until tender. Remove from heat and set aside.

In a small saucepan over low heat, blend the remaining butter, sour cream, heavy cream, and the Greek yogurt together. Remove from heat. Slice potatoes in half, lengthwise. Carefully scoop out the potato with a spoon, leaving the potato skins intact. Put the scoops of potato into the saucepan and mix together with the butter and cream mixture. Return the hollowed out potato shells to the baking sheet. Mash the potato and cream mixture until smooth. Add salt and pepper to taste.

Scoop the potato mixture back into the shells, and sprinkle scallions over the tops. Place back into the oven for 10-15 minutes. Serve hot. Serves 6.

Last weekends trip to San Francisco was full of fun times with my family and, as always, tons of great…